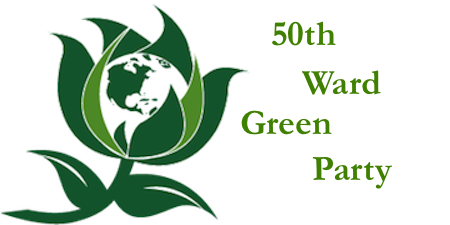 Please avoid the following, they censor us.

The 50th ward of Chicago is a political division of Chicago City located in its far north side. With the Democratic Party dominating Chicago city politics, the Green Party in Cook County often runs candidates who finish in a distant second place, since there is often no Republican candidate.

The 50th Ward Green Party opposes the Democratic Party establishment, especially the well-known and controversial Democratic Organization in Cook County, which has a long history of alleged corruption.

It is alleged that Facebook and Twitter throttle our traffic, so please try the alternatives. Follow Uncensored News on Mastodon, join the Unofficial Green Party Discord Server or use the subscribe button below to connect by email. Better yet, send me a personal email.