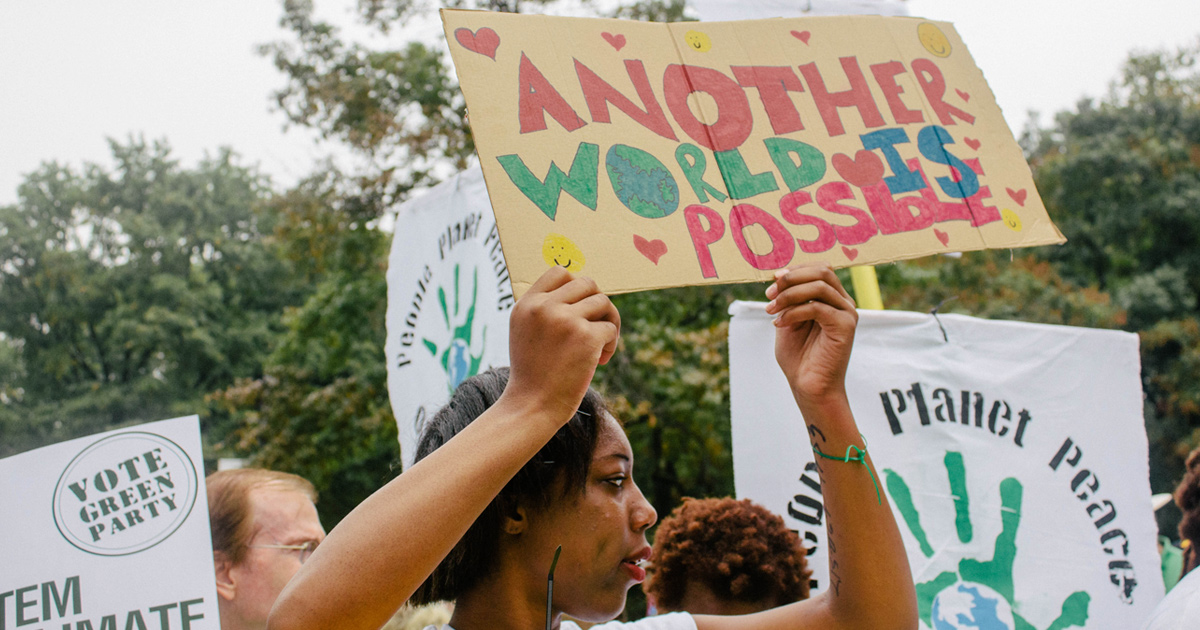 Our current economic system is gravely flawed. It is unjust and unsustainable because it is premised on endless economic growth and destruction of nature. Our market economy, by externalizing the environmental and social costs of greenhouse gas emissions, is creating the greatest market failure in history: climate change, and its devastating effects. Our government's top economic goal — increasing Gross Domestic Product — impels us to perpetually intensify our resource use and environmental destruction.

Green economic policy places value not just on material wealth, but on the things which truly make life worth living — our health, our relationships, our communities, our environment, and building peace and justice throughout our nation and the world. We aim to maximize our quality of life with a minimum of consumption. We aspire to less "stuff" but more happiness. We propose a shift away from materialism to help people live more meaningful lives as we save the planet from climate change and ever-larger mountains of waste. We need to acquire the ability to distinguish between need and greed.

We must also end the colossal waste of taxpayer funds for armaments and war, to reduce our nation's federal debt, and fund our environmental and social needs.

Greens intend to provide a green job to anyone who wants one. We support using the tax system to bring more equality to our nation. Rising income inequality makes us all poorer in myriad ways. More equal societies are happier, healthier, safer and greener.

Greens support strong local economies and regional trade. The best model of economic security is for a community and region to be largely self-sufficient in the production of its necessities. We support not the corporate control of "free trade" — which, through the machinations of the World Trade Organization places the enrichment of multinational corporations above the level of national laws — but "fair trade," which protects communities, labor, consumers and the environment. Local economic vibrancy and regional trade keep more money in the community and the region, rather than going to distant corporate headquarters. This is the most sensible model for economic security.

Greens will change the legal design of the corporation so that it does not maximize profits at the expense of the environment, human rights, public health, workers, or the communities in which it operates. We believe the giant multinational corporation is the world's most potent force for environmental and social destruction.

Unlike other political parties in the modern era, the Green Party views economics not as an end in itself but as a service to community development through the building and strengthening of community bonds that constitute the social fabric.

Greens are defenders of the commons—the vast trove of wealth owned by the people, the social and tangible assets we inherit from generations past. Most people living in this country yearn for a more vibrant and lively commons, such as a richer community life, more parks and protected wilderness, clean air and water, more silence, better access to information and knowledge, and a more nourishing culture. We must stop big business from undermining and stealing our common wealth, such as our public forests and minerals, the fruits of federal research, the public airwaves and the Internet.

To create an enduring society we must devise a system of production and commerce where every act is sustainable and restorable. We believe that all business has a social contract with society and the environment — in effect a fiduciary responsibility — and that the concepts of socially responsible business and shareholder democracy can be models for prospering, successful business.

This policy of securing economic growth is having negative effects on the long-term ecological and economic welfare of the United States and the world. There is a fundamental conflict between economic growth and ecological health (for example, biodiversity conservation, clean air and water, atmospheric stability).

We cannot rely on technological progress to solve ecological and long-term economic problems. Rather, we should endeavor to make lifestyle choices that reinforce a general equilibrium of humans with nature. This requires consciously choosing to foster environmentally sound technologies, whether they are newer or older technologies, rather than technologies conducive to conspicuous consumption and waste.

Greens want to reduce the economic and political power of large corporations, end corporate personhood and re-design corporations to serve our society, democracy and the environment.

Unelected and unaccountable corporate executives are not merely exercising power in our society — they are ruling us. Greens will reduce corporate powers and privileges, including by stripping them of artificial "personhood" and constitutional protections. The Green Party supports strong and effectively enforced antitrust laws and regulation to counteract the concentration of economic and political power that imposes a severe toll on people, places and the planet.

One point remains unequivocal: our planet cannot afford business as usual any longer. Because corporations have become the dominant economic institution of the planet, we must compel them to serve human and environmental needs, so that our peoples, nations and environment may live long and prosper.

We affirm the importance of access to a livable income.

Federal and state taxes must be strongly progressive.

Our current tax system is outrageously unjust. It is riddled with loopholes, subsidies and dodges for corporations and the super-rich. Most working people pay too much in taxes compared to corporations, multi-millionaires and billionaires. Many of our biggest and most profitable corporations pay little or no tax. Much investment income is taxed at less than the rate workers pay.

We can afford to cut taxes for most people if we make corporations and the super-rich pay their fair share. Then we can cut them even more when we halt our nation's wasteful spending on wars, weaponry and militarism.

We will institute comprehensive tax reform to simplify the tax system. We will eliminate loopholes and other exemptions that favor corporate and wealthy interests over tax justice.

Small business, in particular, should not be penalized by a tax system which benefits those who can "work" the legislative tax committees for breaks and subsidies. We support substantive and wide-ranging re- form of the tax system that helps create jobs, economic efficiencies and innovation within the small business community. We will end "corporate welfare." Smaller businesses are the U. S. A's great strength. Greens believe government should have a tax policy which encourages small and socially responsible business.

Political democracy remains a distant promise without economic democracy. A principal instrument for achieving economic democracy is our tax system. Taxes are the means whereby we fund our public services. They can also help create equity, justice, health and sustainability.

Greens support reforms that give communities more control over their own local economies.

Greens support decentralization, and call for a community-based economics whose aim is local prosperity and self-sufficiency.

Successful local Green communities nurture everyone of all ages, generate good jobs and housing, and provide public services; creating cities and towns that educate everyone, encourage recreation, and preserve natural and cultural resources; building local governments that protect people from environmental hazards and crime; and motivating citizens to participate in making decisions.

G. Small Business and the Self-Employed

Greens support a program that counteracts concentration and abuse of economic power. We support many different initiatives for forming successful, small enterprises that together can become an engine of (and sustainable model for) job creation, prosperity and progress. Small businesses are where the jobs are being created. Over the past decade and a half, all new net job growth has come from the small business sector.

The Green economic model is about true prosperity—Green means prosperity. Our goal is to go beyond the dedicated good work being done by many companies (referred to as "socially responsible business") and to present new ways of seeing how business can help create a sustainable world, while surviving in a competitive business climate.

We believe that conservation should be profitable, and employment should be creative, meaningful and fairly compensated.

Access to capital is often an essential need in growing a business. [See section I. Banking and Insurance Reform in this chapter]

There is plenty of work to do that does not jeopardize our future, does not widen the gap between the richest and the poorest in our society, and that can enrich our communities. We must encourage the creation of these opportunities. People whose livelihoods depend on supporting remote, multi-national corporations cannot be expected to support changing the system.

The Green Party proposes a third alternative to a job or no job dichotomy: that is to provide everyone a sustainable livelihood. The need of our times is for security, not necessarily jobs. We need security in the knowledge that, while markets may fluctuate and jobs may come and go, we are still able to lead a life rooted in dignity and well-being.

The concept of a "job" is only a few hundred years old; and the artificial dichotomy between "employment" and "unemployment" has become a tool of social leverage for corporate exploiters. This produces a dysfunctional society in various ways: (1) It is used to justify bringing harmful industries to rural communities, such as extensive prison construction and clear cutting of pristine forests. (2) It has been used to pit workers (people needing jobs) against the interests of their own communities. (3) It has created a self-esteem crisis in a large segment of the adult population who have been forced into doing work that is irrelevant, socially harmful, or environmentally unsound.

We will also promote policies that have job-increasing effects. Many people will still need jobs for their security. We need to counterbalance the decline in jobs caused either by new technology, corporate flight to cheaper labor markets outside our borders, or the disappearance of socially wasteful jobs that will inevitably occur as more and more people embrace a green culture.

To begin a transition to a system providing sustainable livelihood, we support:

I. Banking and Insurance Reform

Greens will overhaul the financial industries to end their culture of impunity and to prevent them from committing fraud or malfeasance so severe as to drive our nation into a massive recession or depression.

Since finance, banking, and insurance institutions occupy a privileged position of power at the center of commerce, this special advantage brings with it special social responsibilities. We must ensure that the institutions chartered for these roles take that responsibility seriously and serve the public interest.

Greens aim to reform the financial industries to eliminate usury (exorbitantly high interest rates on loans) and ensure that they meet their obligations to taxpayers and local communities.

The crisis in our financial system makes it imperative that we restructure our monetary system. The present system of privatized money issuance and control has resulted in the misdirection of our financial resources to speculation, toxic financial instruments, and loans that create huge profits and wealth for the corporate few, but inadequate income and jobs for the common people.

It is both possible and necessary for Congress to take back its exclusive Constitutional power to create our money (Article1 Section 8) without the creation of debt, and assume the responsibility to spend this money directly into circulation to fund public benefits outlined in the Federal Budget. Only with a Public Money System can the government direct our national wealth to the needs of the people through their local and state governments. A Public Money System will enable millions of good livelihoods, provide sufficient incomes, shrink the debt burden and begin to close the wealth gap. Public money has not been issued since Greenbacks, introduced by President Lincoln in 1862, and circulating as public money until 1971.

To reverse the private control of issuing our nation’s money; to reverse the immoral and undeserved concentration of national wealth and income resulting from that private control; to place control over money within a more equitable public system of governmental checks and balances; and to end the regular recurrence of severe and disruptive financial crises that mark the Booms and Busts cycles of capitalism – the Green Party proposes the following three Public Money solutions to be enacted together: